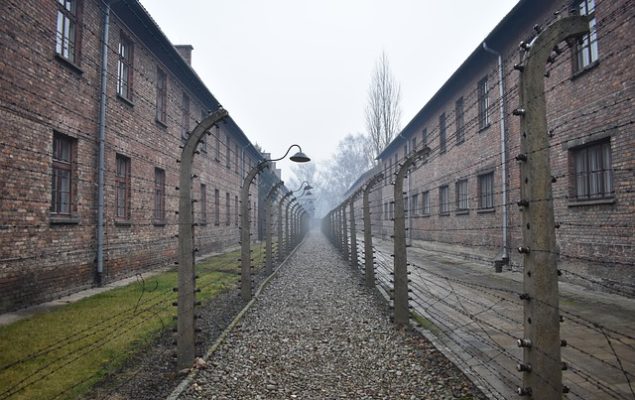 We take the road from Auschwitz I to Auschwitz II (Birkenau) by a free bus between the camps. We get off next to the guardhouse and the main gate of Auschwitz II, which is the last stop of the “journey” of people from all over Europe. Mainly Jews were brought here and many transports were all directed directly to gas chambers. As needed, people suitable for forced labor or medical experiments were selected. People who passed it positively were given a number and then tattooed. Auschwitz-Birkenau was the only Nazi camp in which it was done.

Auschwitz II looks different than the first camp. A large space covered with grass, with rows of barracks and chimneys. At the end of the tracks you can see the ruins of gas chambers with crematoria, blown up by the Germans at the end of the war. Between them, the International Auschwitz Memorial and 23 plaques. Each one has the same inscription, but in a different language: “Let it forever be a cry of despair and a warning to humanity is a place where the Nazis murdered about one and a half million men, women and children, mainly Jews from various European countries, Auschwitz-Birkenau – 1940-1945. ”

The tour ends in one of the barracks, where once again we try to imagine the conditions in which the prisoners had to live. Three-story berths look more like a hen house than a place where people could stay – Auschwitz tour.

A visit to Auschwitz is a shocking experience, but every person should see the camp at least once in their life. Buildings, photos, descriptions and objects evoke terrifying events from the past and do not let them pass by indifferently.

Walking around the camp, you get the impression that you are walking around a large factory, very well organized, in which the role of slaughter animals were played by people. First, transport in cattle cars, then segregation. The sick, old and children went straight to the gas chamber. Of course, earlier, like the rest of the prisoners, they were robbed of every thing.

Those who successfully segregated were shaved, marked and placed in barracks. They were assigned to various jobs that they performed until they did not weaken or fell ill. With food rations they received, they were given a maximum of 3 months to live. Then they also found their way to the gas chamber.

Some treat visiting the Auschwitz-Birkenau camp as a history lesson, but it is worth looking at it more broadly. One should think about what was the basis of the rise of fascism, how the wave of hatred and violence was created and refer to later years and the present.

Unfortunately, the longer you think, the more it seems that we as humans do not learn from mistakes. Since the end of World War II, wars continue to break out and more dictators appear, eager for undivided power and not shy away from it. Sometimes they murder their own citizens like the Khmer Rouge, who murdered 2 out of 7 million Cambodian citizens for 4 years of rule (here you will find more about the Tuol Sleng Genocide Museum and the Death Fields). Sometimes the reason for involvement in warfare is the desire to acquire natural resources belonging to another country.